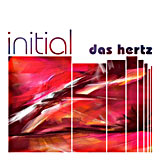 This is Das Hertz before the group was baptised Das Hertz. The very first copies of this album were credited to The Nameless and entitled "What if this group actually existed".

Even before spring 2006, it was clear to each of the four that it would be a nice idea to start something new all together. But due to lack of time the quartet was unable to meet together. So it occurred that two trio line-ups, both featuring bassist and drummer, made first attempts separately. While the first trio with Martin Ziegler had some humble beginnings by rehearsing compositions, the second trio featuring Michael Peters started free improvising on the spot.

And that is exactly what you hear on this release: The very first gathering of the guitar-based trio which took place on April the 5th. The recorded and edited result seemed to make up a useful sketch about in what directions the targeted project could proceed. But since outside listeners enjoyed it even more than the band itself, it was later decided that it should mark volume one in this series of web-albums.

Much to the bassist's surprise his alter-ego as Schäng Pfui came into demand of two event organizers the following summer. He replied that he now was completely into something else, but that this still would include enough electronics and experimentation for those kinds of events prospected. So that's what made the loose project become a band, choose a name and -due shortage of time- discard repertoire. The weeks that followed would carry them to what you can hear on "Electric Gentry".

The front-cover artwork is a creation by Anjin, used by kind permission. Visit him at www.anjindesign.com. The cover also features beautiful images created with HOP, Michael Peters' homemade fractal-animation software.